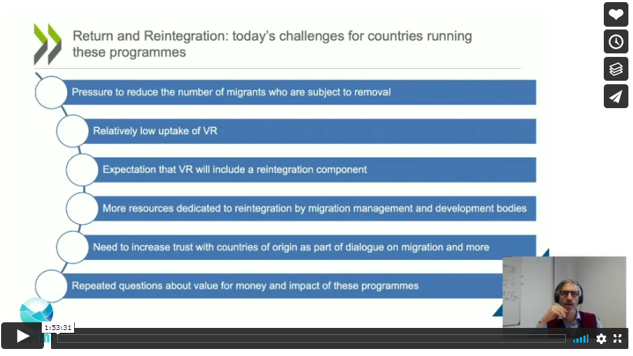 A Zoom-webinar was held on the 3rd of December by Delmi, and co-organized by the OECD. The OECD report that AMIF's project group has contributed to, Sustainable Reintegration for Returning Migrants: A Better Homecoming, was presented with a Sweden-specific framework.

Both national and international actors in the field of return and reintegration had the opportunity to comment on the presentation of the report's findings and recommendations.

The report is part of a larger project between the OECD and the Deutsche Gesellschaft für Internationale Zusammenarbeit (GIZ), on behalf of the Federal Ministry for Economic Cooperation and Development in Germany (BMZ). The purpose was to discuss and problematize a sustainable return and reintegration through exchange of knowledge and study visits to member countries, where Delmi has been active.

Jonathan Chaloff, Senior Policy Analyst and report writer, outlined how the common challenges facing countries with return and reintegration programs were one of the drivers in writing the report. During the study visits, it became clear that no two programs are exactly the same, but that there are similar components. The question is not whether an individual has had a sustainable reintegration, but whether programs are designed in a sustainable way that can at the same time contribute to development in the countries of origin.

”Building the capacity of local institutions is key, and I think it is one of the great aspects of involving development thinking. It is not just enough to have reintegration in origin countries and policy plans, the ownership needs to be matched by capacity”.

Jonathan Chaloff on investing the capacity of origin countries to support reintegration and maximize development impact.

Mattias Wahlstedt, Delmi’s new Head of Secretariat, made a welcome remark and thereafter the discussion was moderated by Åsa Carlander Hemingway, Delegation member at Delmi and Head of Unit at the Swedish Migration Agency. Panellists based in Sweden, France, Germany, Afghanistan, Belgium and Finland commented on the report based on their work experience in the return field.

Johannes Behrens talked about the program "Returning to new opportunities" which helps returnees to support themselves financially. Like Jonathan Chaloff, he stressed the importance of involving local actors already in the design of reintegration measures but also the link to development to avoid pull factors for re-migration. Edmond Gashi, who works at a counselling centre in Kosovo, shared their 360-degree approach to migration, which is aimed not only at returnees but also at their families and potential migrants to prevent irregular migration.

In the role of Return Liaison Officers, Kjell-Terje Torvik and Anders Schogster both expressed that stigma is linked to return and how returnees are considered to be failures in a migration journey where the family has usually been involved. They both agreed that it is important to transform the feeling of shame into acceptance in order to create a change from deportation to voluntary return. Kristina Rännar from the Swedish Migration Agency explained that approximately 70 percent of asylum seekers in Sweden are rejected and that reintegration efforts are not of major importance for the decision to return, but rather that it is a combination of different factors that affect the return process.

Cayan Fahim highlighted the importance of data collection, monitoring and evaluation to identify shortcomings and improve the programs, which Alexandra Segenstedt has experience of when interviews were conducted in Kosovo, Albania and Iraq for the Swedish Red Cross AMIF-funded project. The moderator confirmed that research is crucial for creating fact-based policies and mentioned Delmi's forthcoming report that will provide a better understanding of a complex but important topic.